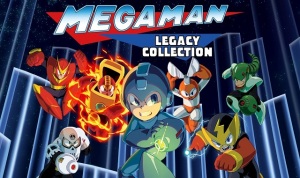 It’s the 25th August and that can mean only one thing to gamers around the world, Metal Gear Solid V: The Phantom Pain is exactly 7 days away from launch. Early reports about how exquisite the game is seems to be only ramping up the excitement to near fever pitch. Words such as “masterpiece” and quotes such as “one in a lifetime game” are already starting to be thrown about. We will have to wait and see. A week to be exact.

So what am I to do until then? Luckily, the answer arrived on the Playstation Store today with the release of Mega Man Legacy Collection.

Now I’m going to be honest with you, I have never played Mega Man. It passed me by and was slightly before my time. As a matter of fact I was only 365 days old (approximately) when the first game came out on the NES. The original Mega Man series ran from 1987 – 1993 on the NES, so you’ll excuse my failure to play them.

However, just because I’ve never played them doesn’t mean I don’t understand or appreciate what they have done for gaming, especially in the early years of home consoles.

This Mega Man Legacy collection comprises of the original 6 games released on the NES. They have all been sharpened up and I must say, they look extremely clean and crisp on a modern HD TV. The 8-bit soundtrack sounds great as do the old school sound effects.

The games themselves are old school platforming perfection. For continuity, and my crippling OCD, I am playing the games in order without skipping ahead. So you’ll forgive me for concentrating on the first game as that is what I have played the most.

Mega Man is our hero – clad in a blue suit and helmet and armed (literally) with a blaster. He has three control functions; jump, shoot and turbo shoot. That’s it. Easy, simple – bing bang bosh. The game begins with a nonlinear level select screen where you can pick any of 6 areas to visit; fire, water, ice etc. and each level has an end of level boss. Once you defeat this boss you take ownership of their specialist weapon. This weapon has limited ammo as opposed to your blaster which is infinite and you collect charge for these weapons by killing enemies. The same goes for topping up your shield/health. The levels flow wonderfully, with tight platforming sections interspersed with tricky enemies that swoop and dive from all angles.

If, like me, you have never played Mega Man before and pick it up for the first time, there is one thing that will hit you straight away. The difficulty. Christ on a bike, this game is hard. Like many games from the early days progressing through 2D platformers relied on a mixture of timing, reflexes and the memorisation of enemy patterns and level features. True hardcore gaming. The only way to get good and progress through games of this difficulty is to play them so much that you know them inside out. Indeed, a quick search on YouTube will provide you with videos of utter beasts beating levels in speed runs that can only be attributed to hundreds of hours during the late 80’s/early 90’s playing Mega Man.

My satisfaction after completing the “Cut Man” stage was one of old school joy. It’s this feeling that pumps the adrenaline through your veins and the addictiveness takes hold. After my first half hour my thumb was feeling sore. A nostalgic discomfort I haven’t felt since holding my SNES controller.

There has been a save function added whereupon you can save your game once during play. A welcome addition as apparently the original series had a cryptic password system – a common theme among games back then (one day, when I can bare it, I’ll talk about The Legend of the Mystical Ninja on the SNES and it’s password system –  a process I can imagine being similar to writing an algorithm for Google’s search functions).

A gallery of enemies has also been added for your perusal as well as a soundtrack playlist that allows you to replay your favourite tunes from your favourite levels. This must be a dream come true for hardcore fans.

All in all I am very happy that I purchased this collection and believe it will be the perfect refreshment before getting stuck into MGS V next week.

The whole collection cost me just £11.99 which for the amount of content you get is well worth it. Personally, I’m just glad I finally got to play this great series – albeit 28 years after it started. 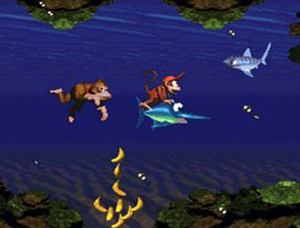 I sometimes sit and wonder about how amazing it would be to step into a time machine and head back to the early 90’s with my Playstation 4 and a copy of something like The Witcher 3 or The Last of Us. I’d love to see the wonder and amazement bestowed upon the gamers of that age – their minds would be blown to smithereens. They’d dribble in awe at the sight of Ellie and Joel exploring a deserted village after which they’d be mumbling incoherently at the lush vegetation passing them by as they ride Roach around Skellige, with Geralt’s white hair flapping in the wind.

Graphics and visuals beyond imagination; scale, voice acting and character movements unbelievable beyond words. Yet there would be one mechanic that would bring even them – the stone age of gamer – to despair. Underwater sections. Or more specifically, swimming.

Since the dawn of home gaming, in the adventure genre particularly, the “water stage” has been a staple of level design. Yet whilst every other factor of gaming has evolved for the better since then, swimming hasn’t.

Take The Witcher 3, for example. A game I have played a lot over the last 3 months and a game I consider to be one of the finest releases in years. Geralt can run around the lush lands with perfect agility but once he comes into contact with water he turns into what can only be described as a drunken vagrant that’s fallen into a canal. You watch in dismay as he randomly scrambles around underwater, with the player frantically smashing the X button to loot a chest and feeling like they are controlling an oil tanker. The problem is compounded when attacked by enemies. Poor Geralt is pinged around like he’s in a pinball machine.

Yet it has always been like this since games went 3D. Think back to Tomb Raider. Even now I can recall the wall pounding frustration at seeing Lara’s drowning animation for the tenth time whilst trying to pull a submerged lever. People cite Super Mario 64 as one of the greatest games ever made, but if you play it again (like I have recently) then you will realise that the swimming sections are utterly dire.

Even modern powerhouse developers like Rockstar can’t get it quite right. Swimming in GTA has that common feeling of sluggish clunkiness that other games of its generation have.

Naughty Dog seem to be the only developer who seem to be actively trying to improve the mechanic. The Last of Us underwater sections were fairly smooth and quite enjoyable. They were still far from perfect, but at least Naughty Dog are trying to improve this age old problem. Other developers seem to shoehorn in water levels with little thought or eye for improvement, as if it’s a necessary evil.

I believe that swimming underwater was at its best in 2D side scrollers. Think Donkey Kong Country, Super Mario World or even Ecco the Dolphin. These games were much more basic of course, but the tap-tap of a single button to control the forward and vertical movement of a character was a revelation. So simple, yet so effective. Some underwater levels from that 2D era are amongst my favourites. The change to 3D overcomplicated things.

Swimming in games is here to stay, but developers need to actively focus on improving it and making it more fluid or else the whole mechanic is in danger of becoming stagnant. 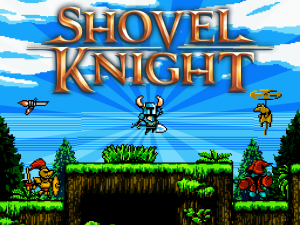 I’m currently dismantling various pieces of rubbish, selling items from my ever growing inventory and carefully selecting which sword/armour/gloves I wish to craft. After 20 minutes I’m happy. My girlfriend thinks I should have used the time to clean out the shed.

This is The Witcher 3, one of the finest games of recent times and certainly one of the stand out releases on this generation of consoles so far. It’s a vast, beautiful and awe inspiring title that has generated much acclaim and rightly so. It’s the only game I’ve played in the last month, until this morning.

I was perusing the Playstation Store on the lookout for any new titles that I may have missed when I came across Shovel Knight. I remember hearing great things about this title when it was released in 2014 but somehow missed the announcement that it was available on Playstation 4 (this could be due to CD Projekt RED putting me into a Witcher inspired coma for the last few months). £11.99 would be the price to play Yacht Club Games’ debut offering. And after a few hours, I can honestly say it’s probably the best £11.99 I have ever spent.

For those who do not know who or what Shovel Knight is then I shall do me best to sum it up in a sentence: It’s a 2D side scrolling retro platformer done in an 8-bit style where you play as a knight with a shovel for a main weapon.

Since the emergence of the Indie Game market there have been a lot of retro-styled throwback titles in recent years. Some more successful than others. I think that a lot of the titles released come down to the player relating and connecting with what they are playing to what they were playing all those decades ago.

That is why I believe Shovel Knight is such a success. Its gorgeous level design, gameplay, story and soundtrack not only remind me of the obvious classic games it pays homage to, it also encapsulates a whole generation of gaming from my childhood. Shovel Knight himself is Arthur from Super Ghouls and Ghosts reincarnated, and the first stage where you can see a castle in the back ground reminded me of a similar sight towards the end of Streets of Rage 2. Everything feels comfortably familiar, from the perfect control system to the classic hit detection “flash” when you strike a boss. You have all the mod cons of recent gaming such as auto saving without it ever losing its authentic feel. This game could have been released 25 years ago and it would have been a triumph then as it is is now.

The difficulty is perfect and the boss battles are wonderfully challenging. I was cursing at the TV after timing a jump wrong over and over but all with a smile on my face, purely for the reason that the frustration was part of the fun! I welcomed it like a long lost friend.

It’s just the perfect game to play after endless hours grinding away with Geralt of Rivia or any other mammoth gaming project one has on the go. If I were to use a food analogy (my favourite) then The Witcher would be an exquisite 3 course meal consisting of foie gras, followed by venison with a red wine jus and finishing with a lemon syllabub. An experience to take your time over and savour. Shovel Knight on the other hand would be a delicious gastro pub-style burger with beer battered onion rings, accompanied by an early 90’s soundtrack playing through your brand new iPhone.

So I had best go clean the shed out now, if I value my life, but when I come back in there will be one game I’ll be itching to play. And it involves a little blue knight with a shovel.