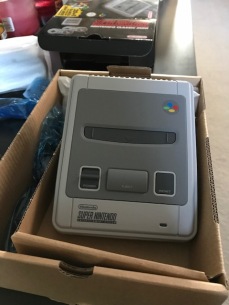 I’ve been pondering recently on what I would consider my best console to date. A tough ask as it’s tricky to balance the nostalgic charm of older consoles with the power and efficiency of modern consoles. Then I started to think about which console I would consider the most important in my life. The answer was there instantly, it always had been – the SNES.

The SNES (or more formally: the “Super Nintendo Entertainment System”) was the first video game console I ever owned. Arriving on Christmas morning in the early nineties I could never imagine that what was in that tightly wrapped box would spark a life-long love of video games.

I don’t intend to sound like a reminiscent old fool, but times really were simpler then. Especially for video game fans. The early nineties saw a division carve its way through school playgrounds around the world – you were either Nintendo or SEGA. The “Console Wars” were in full swing and the battle lines were drawn. Phrases such as “blast processing” and “16 BIT” were thrown around with reckless abandon. Those days are for another post however, I bring them up to emphasise the power of Nintendo, and the SNES, at that time.

Fast forward a quarter of a century and I still own the original cartridges I had back when I had a lovely head of hair. The problem is that these days older games look dreadful on modern TV’s and the hardware of the consoles themselves is starting to deteriorate. I’ve tried to store my original SNES the best I can by wrapping it up in an old carrier bag. Maybe not the most dignified way to treat such a beloved family member.

So imagine my joy when Nintendo announced that they were following up the success of last year’s NES Classic Mini release with the SNES Classic Edition. I could barely contain my excitement. The truth is, I’ve been waiting for something like this for years. I remember being at MCM Comic Con back in 2013 and seeing the Retron 5, but after almost a 2 year delay I finally lost interest.

So, after getting very lucky and managing to secure a preorder, I picked up my SNES Classic on release day and I can finally report that it’s everything I expected it to be – a nostalgic trip down memory lane via HDMI!

The box is compact and small and I must admit that I didn’t want to open it (I’ve already decided to buy a “spare” when stock becomes available once again”) and had to fight the urge to lock it away like a highly valued piece of treasure. Once I did open the box I was greeted by the SNES itself, albeit a miniature version. The shrunk down console is light and sturdy. The “feel” of the plastic will be familiar to anyone who owned the original. This feeling is only compounded once you un-package one of the controllers. Unlike my original SNES controllers, these are crisp and brand spanking. The buttons click and press like a dream. They feel much lighter too. 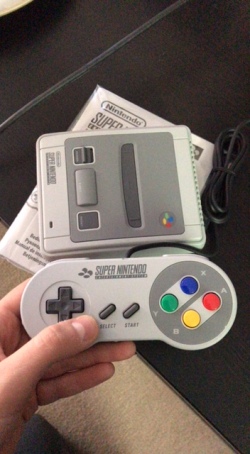 That’s side by side! Controller bigger than console

The NES Classic last year was notorious for having extremely short controller wires. Nintendo have rectified this and I find the length perfect for me. However, I have already had to jump off the couch a couple of times to stop the dog from tripping over the wire and pulling the console of its perch.

The SNES has two ports in the back – HDMI and a DC in. That’s it. Nice and simple. No fannying around. Yet, even thought the console does come with a HDMI cable and USB lead, it doesn’t come with a plug to connect the USB to the mains. I had to scramble through my drawer of electrical bits in order to find an adaptor.

Once we were all hooked up I flicked the familiar power on switch and we were in business! The menus are responsive and simple and the layout is as intuitive as you’d want. In the display settings menu you can alter the way the screen looks; old TV, 4:3 and Pixel Perfect. You can also add a frame to the edge of the screen if you like or just stick with black. These additional options are a nice touch.

The games themselves are a who’s who of some of the greatest games ever released on the SNES and indeed some of the greatest games ever made, full stop. There are 21 in total with classics such as Super Mario Kart and Donkey Kong Country included. I won’t go through them all, but it’s safe to say that even a handful of these are worth the price alone. Firing up Super Ghouls and Ghosts was like playing it yesterday.

With a limited number of games on the console there was always going to be some argument over what was included and what was omitted. Personally, I would have liked Pilotwings and Legend of the Mystical Ninja to have made an appearance, but I understand that it would have been impossible to please everybody. Hopefully I can play these again once Nintendo get a move on and finally make the Virtual Console available for the Switch.

There was a big deal made over Star Fox 2 finally getting a release on the SNES Classic Edition over 2 decades after it was originally canned. Personally for me, I find it hard to  muster any excitement as I thought the original was overhyped crap back in the nineties. A controversial view maybe, but a valid view nonetheless.

All in all I am very impressed with what Nintendo have achieved here and I look forward to many more years of playing these classic games.