2 Comments Posted on November 11, 2015 The State of Play - Gaming Articles 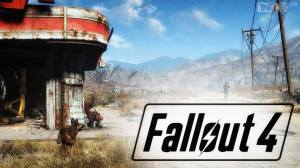 Is it me or does Fallout 4 look a bit shit?

Now, before I get inundated with virtual dog turds being sent to the comment section, I would just like to say that I think Fallout 4 is superb. I, like hundreds of gamers around the world, have being playing feverishly since yesterday’s release.

I’ve already invested many hours in making no meaningful progress whatsoever and instead spent the time trying to figure out how to get my generator to power my ceiling fan that I have in my new prefabricated house (I also spent a good hour trying to pick the right pictures to go alongside my dining table – but that’s a story for another day).

For Bethesda fans this is what it’s all about; the crafting, the upgrading, the exploration – it’s what makes these games addictive and has the effect of warping time so that when you look at your watch, hours have gone by in the blink of an eye. There is so much to see and do – the shear quantity of content is staggering and will keep gamers busy for many months.

Fallout 4 has delivered in every department, but one: visuals.

As soon as I exited Vault 111 and stepped out blinking into the blinding Sun, I was impressed by the draw distance and detailed horizon. However, it was on closer inspection of the immediate world around me that things got a bit disappointing. Copied and pasted textures are everywhere. In buildings there is a serious lack of lighting/shadow on objects/furniture and when you get up close to an NPC you realise that the character models are found lacking. 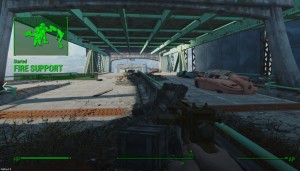 I wouldn’t be sounding dramatic when I say that this could be considered a last generation release. The thing is, I don’t know why it looks this crap. Maybe we could turn a blind eye but this year we all played The Witcher 3, a game just as vast and consuming yet also one of the most beautiful games I’ve ever played.

Bethesda is also a larger developer than CD Projekt RED and arguably wields more financial clout than the Polish outfit.

So why does it look so average? Laziness? Lack of focus? Naivety? I honestly don’t know. Bethesda has never made the most visually stunning games, and some would argue that the raw look and buggy nature all adds to their games’ appeal and is part of their character. I disagree, I think if you’re selling a product then it should be near perfect before it is released for retail. Visuals aside, bugs and programming flaws should be rare and should never be considered “part of a game’s character”.

I’m enjoying Fallout 4, it’s all I can think about when I’m doing other things. It’s involving, satisfying and rewarding all at the same time. I love it. It’s just disappointing that they could have made it absolutely perfect had it looked as good as it could have.

Bethesda are going to make a lot of money from Fallout 4, more money than most game developers will make in a lifetime of releases, and I want them to invest it. I want them to make their budget even bigger for their next big release and put more money aside for hiring better artists, QA testers and creating a better engine that can deliver better lighting and a more beautiful world.

There is no excuse for poor looking games anymore, not from developers with huge amounts of wealth and access to the best talent the gaming world has to offer.

Right, back to Fallout and I’ve decided. I’m going to go for the picture of a sailing ship for my dining room. Now I just need a nice rug for the bedroom……